raybradburyboard.com
Religion 101 or How is the orange crop doing?
This topic can be found at:
http://raybradburyboard.com/eve/forums/a/tpc/f/6791083901/m/9421013782
Mr. Dark
Religion 101 or How is the orange crop doing?
Tried to post a picture of Nard, Phil, and I at the conference, but it said the file was too large. Sorry about that.
Ken Engel
To have had that window into so many things Mr. Bradbury and to have been enriched by a friendship that embraced so many facets filtered through Nard's sensibilities must have been a special gift. Sounds like you and Nard were both very lucky. Did Nard talk with you about how Mr. Bradbury reconciled his perspectives of humanity, life and religious thought? And did Nard tell you about how those conversations he had with Mr. Bradbury affected Nard's own views of religion or spirituality, of science fiction and of life? And vice versa?
Many thanks! Ken
dandelion

quote:
Originally posted by Mr. Dark:
Tried to post a picture of Nard, Phil, and I at the conference, but it said the file was too large. Sorry about that.

This includes a picture of Nard and Phil. http://bradburymedia.blogspot....ng-nard-kordell.html
Mr. Dark
We did have those conversations. Mr. Bradbury and I talked on several occasions, sometimes on the phone. Since I've been working on a book on Mr. Bradbury's religious views, he and I talked about which stories were specifically about his views on religion, etc. Unfortunately, I put that on hold while I went to law school. But Nard and Mr. Bradbury had many conversations of a personal nature about religion. And Nard would share those discussions with me.
dandelion
Nard wrote me about this a lot. Long story short. Nard was a born-again Christian, a religion which believes Jesus Christ was the Son of God and salvation comes to His followers through belief in Him (hopefully accompanied by a lifestyle in keeping with Christian tenets). It was crystal clear that whatever Ray believed about the nature of God, or Jesus, Who he usually referred to as "Christ," was not in keeping with Nard's views! This caused Nard a good deal of pain and it also caused Ray some pain through Nard's efforts to convert him. Nard even had Pastor Rick Warren, who spoke at Obama's first inauguration, visit Ray and it was apparent to them in about five minutes that "Ray was not a Christian." Other than that one thing, Ray enjoyed having Nard around.
Ken Engel
Thanks to both of you. It's fully understandable that you (Mr. Dark) may prefer to answer a bit circumspectly, given you're in the middle of writing your book about Mr. Bradbury's religious views. And thanks, dandelion, for training another sight line on those views.
dandelion
Censorship? Belongs here, anyway. http://touch.orlandosentinel.c...rticle/p2p-81964372/
Mr. Dark
Hi Ken: I'm not being circumspect in the sense that I'm withholding a secret to be revealed in my book. Many have written on his religious beliefs and he has discussed this in interviews. I'm still trying to figure out how I would articulate what he is saying about religion and what his philosophy of life is. To do that I'm examining ALL of his novels, most of his stories, most of his poems, and most of his published interviews--plus, of course, considering what I learned when talking with him. So I'm not playing a game. The value of my book will be in helping people develop a way of exegeting Bradbury's writings--not in some final answer.
dandelion
One peculiar thing Ray often did was when someone made a statement regarding what a particular quote or work of his meant, he would say they did not understand it and had it wrong and sometimes elaborate on what it REALLY meant. (There's a well-known story of how a discussion with a class--in a college, I believe--regarding F451 got heated and what Ray told the lot of them to go do--but I'll go out on a limb and say he did this a lot both in group and one-on-one discussions--telling people they were wrong, not telling them what to go do.)
Doug Spaulding
Orange crops in other worlds?!

dandelion
No one to harvest oranges due to the orange peril, but the religion thread is still here!
dandelion
To those who celebrate it, Happy Easter Week!
dandelion 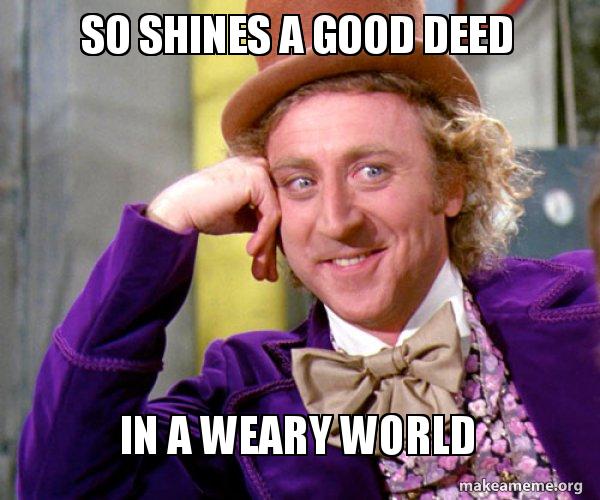